gave it new respectability and they even gave it a gospel which came to be known as Favreau’s Fourth Principle.  Early in 1965, after the initial and tentative intergovernmental agreement on the Fulton-Favreau Formula, and while governments were preparing to explain and defend it to their legislatures and publics, the Government of Canada published an explanation and justification of the Formula over Mr. Favreau’s name in a booklet entitled “The Amendment of the Constitution of Canada”.

Rarely has the opinion of a federal politician, rarely has a federal government publication, been so venerated and immortalized, particularly by provincial spokesmen.  You may recall that in 1920, John Maynard Keynes published a book entitled “The Economic Consequences of the Peace”.  In 1946, there was published a book by Etienne Mantoux entitled “The Carthaginian Peace, or the Economic Consequences of Mr. Keynes”.  Well, Mr. Favreau published his book called “The Amendment of the Constitution of Canada”.  I am hopeful that some day a masters or doctoral student will write a thesis entitled “Mr. Favreau’s Amendment of the Constitution of Canada”, or perhaps “The Constitutional Consequences of Mr. Favreau”.

It is important to see what Mr. Favreau was trying to do with his publication.  When the proposed Fulton-Favreau Formula was announced in 1964 with all its unanimity requirements, it became the focus of much criticism in which I then joined as a professor of law at this institution.  Many of us from the academic world who expressed opinions publicly on the subject even had the distinction of being quoted with approval by Mr. Diefenbaker in the House of Commons! 9  There were some of us who criticized the Formula for its inflexibility and, of course, there were others who criticized it because it was too flexible and would allow some amendments to be made without unanimity.  With his White Paper, Mr. Favreau was trying to sell the Formula, and to do that he wanted to show that it actually was the embodiment of established practice.  Therefore, to meet his critics inside and outside Parliament who said that his Formula was too inflexible, he wished to demonstrate that a substantial provincial role in amendment already was well established.  After briefly describing the history of past amendments, he tried to synopsize the established practice in four principles which he said, “though not constitutionally binding in any strict sense, … have come to be recognized and accepted in practice as part of the amendment process in Canada”.  The first three principles were uncontroversial.  The first was that the United Kingdom would not amend our constitution without a request from Canada.  The second was that such an amendment should be requested by a Joint Address of the House of Commons and the Senate of Canada.  The third
_____
9. House of Commons Debates — April 6, 1965, p. 24. 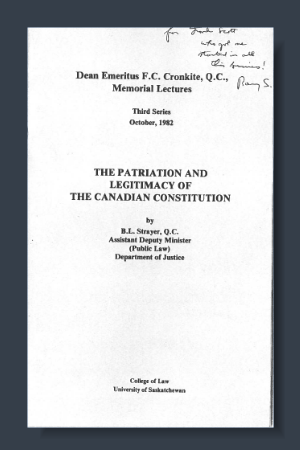 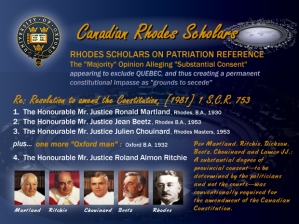